StrataQuest is TGs most evolved image processing solution for both brightfield and fluorescence images. It can automatically detect most tissular structures on a digital slide. It integrates detected objects into detailed context-based quantitative analysis. The software is also an ideal image processing environment for clinical researchers and dedicated image processors.

There are over 50 StrataQuest APPs which can be used for automated analysis and the number is constantly growing.

StrataQuest has importers for the following digital image or slide formats:

StrataQuest
is integrated into the following TG systems:

StrataQuest is also available as a standalone software.

A StrataQuest APP is simply an analysis solution for a specific task. It is complete up to the point of providing the specific analysis results ready to be exported to, e.g., Excel or CSV formats. This is complemented by an export function for all images from the software. The core feature of an APP is a simplified, tabbed "Easy Mode" user interface. While an APP is meant to be run by simply clicking the "Analyse" button, the interface allows the user to make adaptations to sample/staining variance if necessary. TGs decade-long experience in providing analysis solutions to the biosciences market has taught that vaunted "only one click" products work - but only on the textbook quality image on which they are presented. 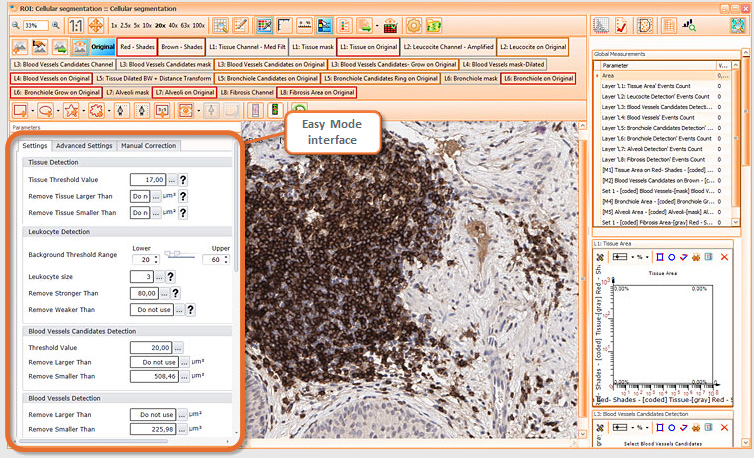 StrataQuest provides a special dual purpose feature set. One purpose is visually sorting and marking specific cell types for e.g. harvesting in the TissueFAXS SORT system. The other purpose is detecting and analysing small cell subunits within a larger organ („clusters“ in the StrataQuest nomenclature). Clusters are defined by a specific central cell (phenotyped by its staining) and the other cluster cells by distance and optionally also by specific staining.

The image below describes the main parts of both workflows on the basis of a colon sample stained with DAPI and for FOXP3, CD25 and CD4. 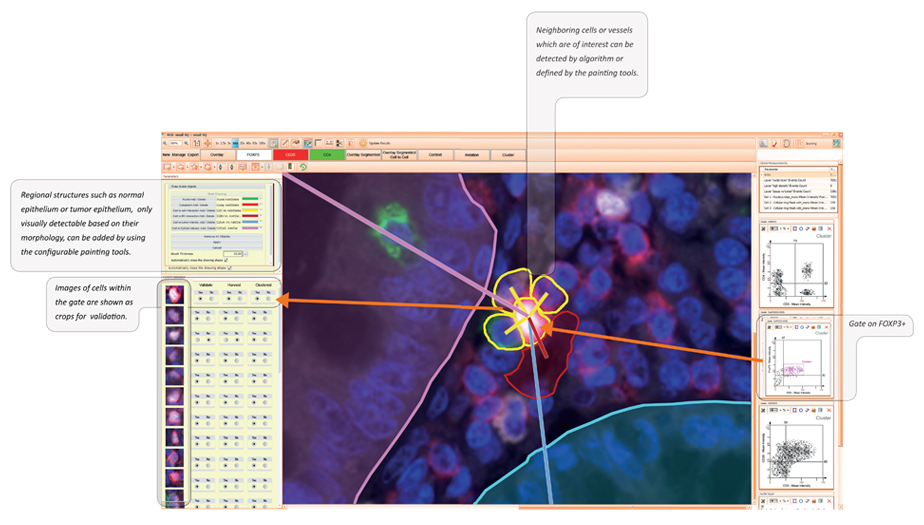 TissueGnostics GmbH
Taborstraße 10/2/8
1020 Vienna, Austria
+43 1 216 11 90
This email address is being protected from spambots. You need JavaScript enabled to view it.