Context-based analysis can be done by manually drawing regions-of-interest. TMAs can be analysed and detected on imported files.

HistoQuest has importers for the following digital image or slide formats:

HistoQUEST
is integrated into the following TG systems:

HistoQuest is also available as a standalone software.

HistoQuest is a brightfield image analysis software for the FACS-like analysis of tissue sections, TMA or cultured cells processed with immunohistochemical or histochemical stains.

The new features of HistoQuest 7 include improvements to the analysis workflow, management of multiple diagrams, image visualization, and the user interface. Here are some highlights of 7.0: 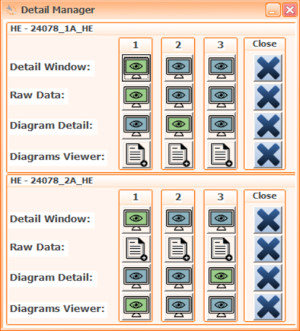 TissueGnostics introduced Tissue Cytometry technology into image analysis software more than a decade ago. While, at a first look, it may appear to be just another form of displaying data, there is much more to it. Combined with segmentation images it is also a simple and intuitive tool to visually validate results. TG calls this "Backward Gating". Backward gating can be done for any measured parameter on histograms and scattergrams. The following examples demonstrate the versatility of backward gating. In the left image backward gating is used to visualise cells in which the HER2/neu staining has a closure angle of more than 180 degrees. In the right image backward gating is used on segmented nuclei positive for Ki-67. 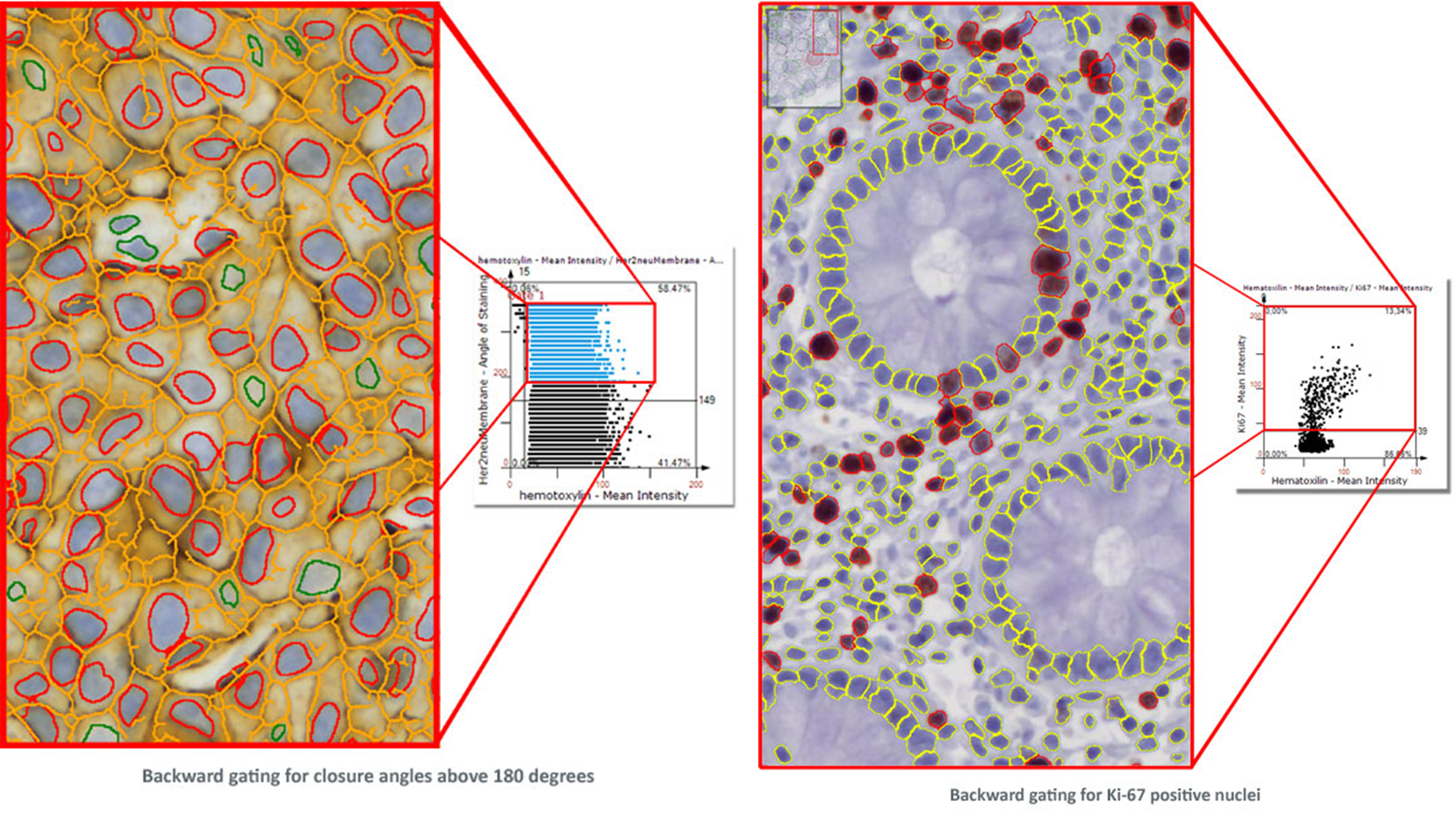 Morphological filtering using Tissue Cytometry technology combined with appropriate planning of the analysis provides a highly flexible and capable instrument for extracting specific data from a sample (see image below). 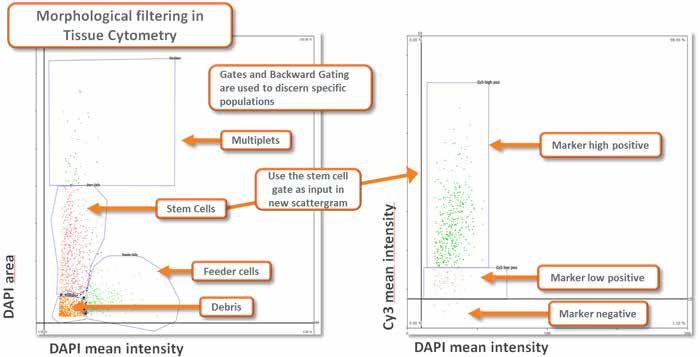 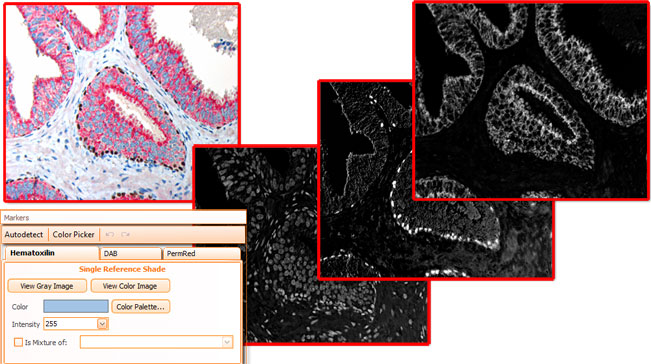 Brightfield images need to be separated into images according to their color components, HistoQuest provides two algorithms for color separation.

The first one automatically detects and separates two colors and an optional third one. The second color separation algorithm is semi-manual (using a color picker) and separates an unlimited amount of colors with great control and precision. 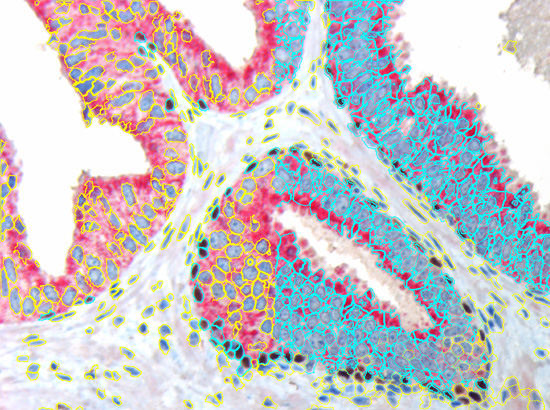 The nuclear segmentation algorithm is highly efficient in difficult situations in tissue and can be set with two values only - mean nuclear size and nuclear channel background threshhold. The cell compartment algorithm provides a large amount of flexibility with a few simple settings (yellow outline = segmented nuclei, blue outline = nuclei positive for DAB or cytoplasm positive for Permanent Red marker). The total area algorithm segments stained areas in a sample.

The dot algorithm provides small dot detection ideal for CISH, ISH and other applications in which the quantification of small objects within cellular compartments is needed. The images below show the quantification of EGFR RNA dots inside of the nuclear compartment. Simple context-based analysis can easily be done in HistoQuest by using manual region tools. Drawing the regions takes a negligible amount of time and provides data for epithelial areas and stroma separately in this example. The skeleton algorithm permits the detection of membrane stainings. 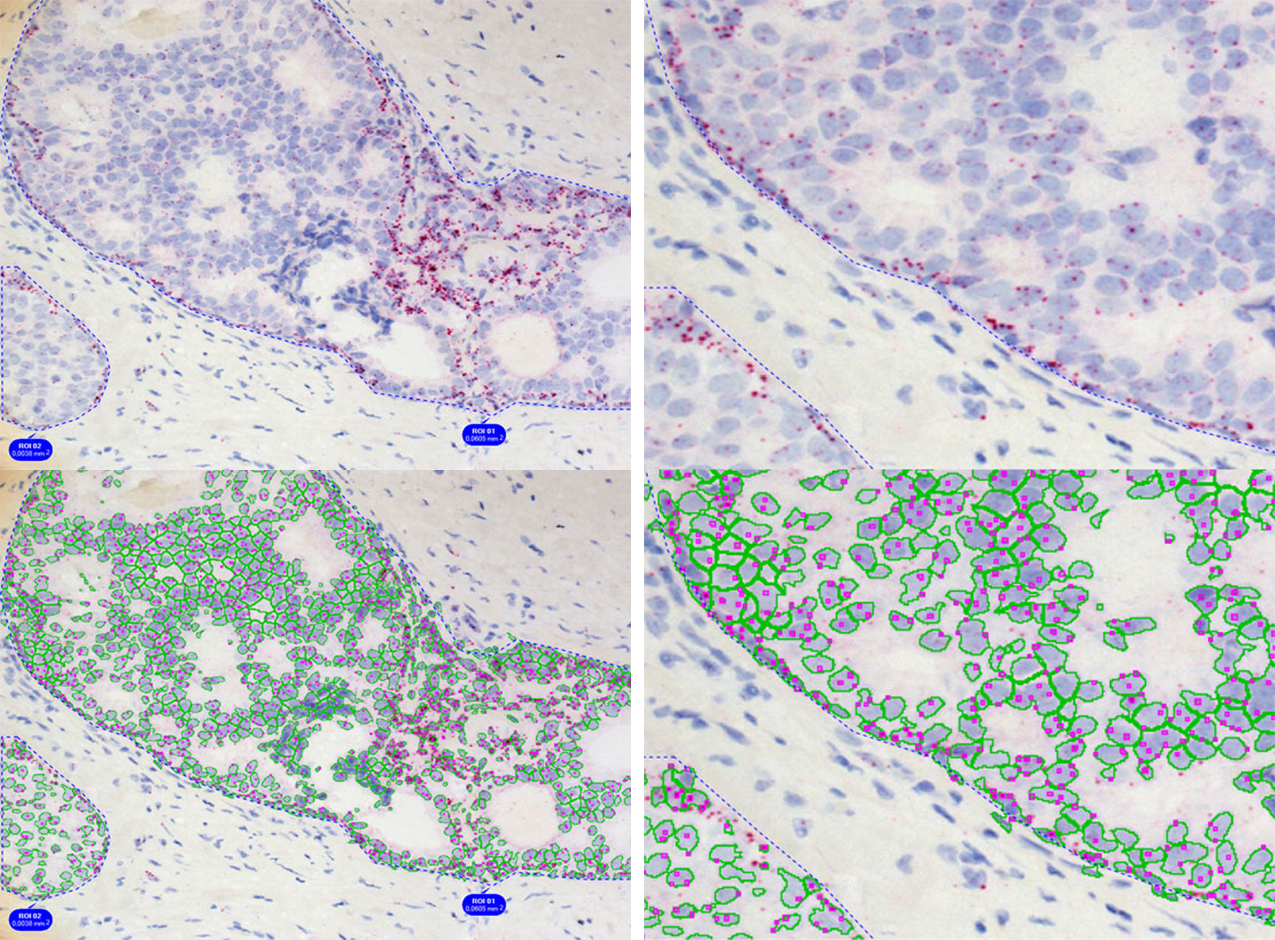 HistoQuest fully supports the analysis of Tissue Microarrays (TMA) scanned either with TissueFAXS systems or those slide scanners for which HistoQuest provides importers. For analysis projects of scans coming from TissueFAXS systems the autodetected TMA regions will be imported. For scans imported from other scanning systems without detected regions the TMA autodetection feature is also available in HistoQuest. 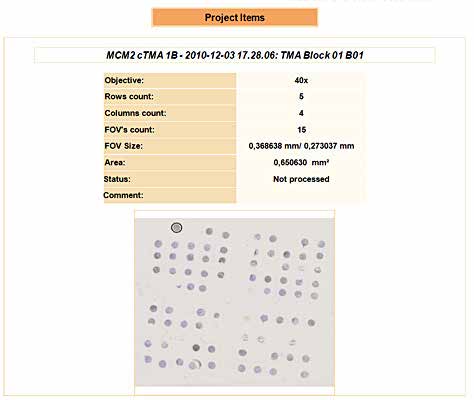 HistoQuest provides four modes for the export of analysis data, ranging from simple prefabricated reports for internal presentations to selective data export from all analysis projects from a complete scientific project.

There is a special pathology-oriented data export feature for the small dot algorithm data, which has been built according to pathologists requirements for FISH analysis.

HistoQuest features include a registration and comparative analysis capability for differently stained consecutive samples. Compare sets provide grouping features for multiple scattergrams and histograms as well as overlaying them. 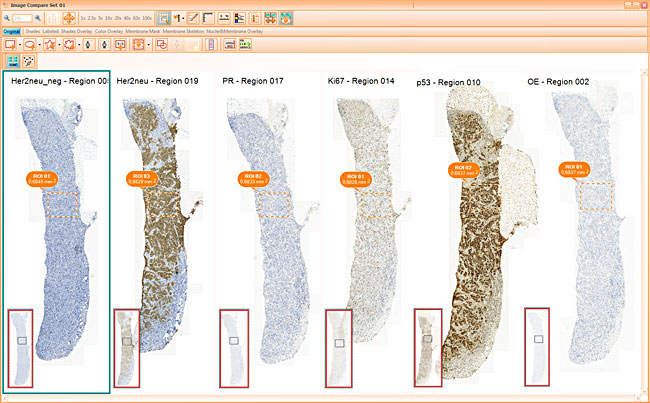 TissueGnostics GmbH
Taborstraße 10/2/8
1020 Vienna, Austria
+43 1 216 11 90
This email address is being protected from spambots. You need JavaScript enabled to view it.

We use cookies on our website. Some of them are essential for the operation of the site, while others help us to improve this site and the user experience (tracking cookies).
You can decide for yourself whether you want to allow cookies or not. Please note that if you reject them, you may not be able to use all the functionalities of the site.